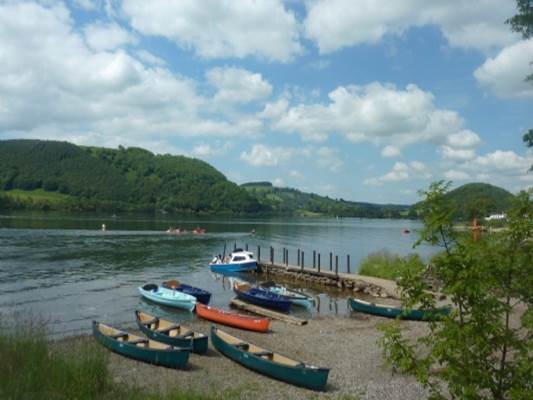 Saturday 10th December saw 5 (Robin E, Roy G, Ian H, Phil C, John H) gather at Waterside House on the north-east shore of Ullswater. After soothing the agitated proprietor by proffering the agreed parking fee we launched onto a calm lake via the campsite slipway. Despite a forecast for it getting quite breezy there was never more than a slight south-westerly to impede progress. We immediately crossed the lake to the northwest shore and followed it closely past numerous fancy boathouses and lakeshore properties, most of which must have been damaged by storm Desmond. Rounding Skelly Nab, where Ullswater Outward Bound is based, opened up the spectacular vista towards Glencoyne bay, framed by Sheffield Pike and the Helvellyn range. A quick stop for elevenses at Aira Point and then we were pushing on again towards the head of the lake where Robin insisted that we round Cherry Holm – we were later to call on all the other islands too. The Goldrill Beck flows into Ullswater as a multi-channel delta. We explored the main channel upstream for a few hundred metres before retreating with the flow and past a large dead salmon. 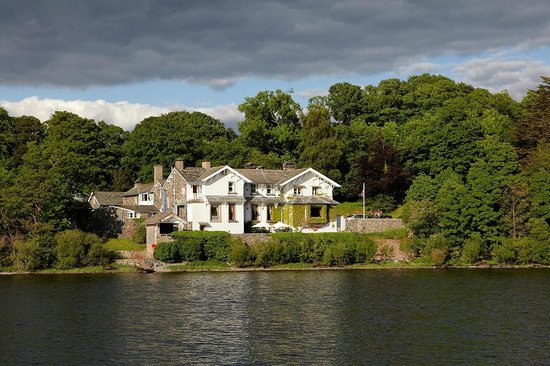 Exploring Goldrill Beck We paddled back along the quiet southeast shoreline, taking in Lingy Holm and Norfolk Island before pulling into Silver Bay for lunch. A lone kayaker passed us in the opposite direction.
Lunch stop at Silver Bay, with The flanks of Place Fell, Birk Fell and Hallin Fell all plunge steeply to the lake giving a splendid, wild feel to paddling this shoreline. The final leg of the journey involved a close approach to the famous Sharrow Bay hotel and there was talk of popping in for afternoon tea – but it was only talk. Arriving back at Waterside House we were surprised to find three members of Penrith Polo club practicing their skills with a goal mounted on a jetty. Thankfully it was getting dark by now so a polo match didn’t ensue! All in, this was a 24km circuit and had we gone down to Pooley Bridge as well that would have added another couple of km.